So let’s jump into the first news which is Astro version 1.0. Astro v1.0 includes a couple of new features and improvements:

What is more, Astro is no longer just a static-site builder. You can now build Astro to a dynamic, SSR-ready server on any popular hosting platform. Additionally, the Astro ecosystem has exploded into 100+ integrations and keeps growing drastically. 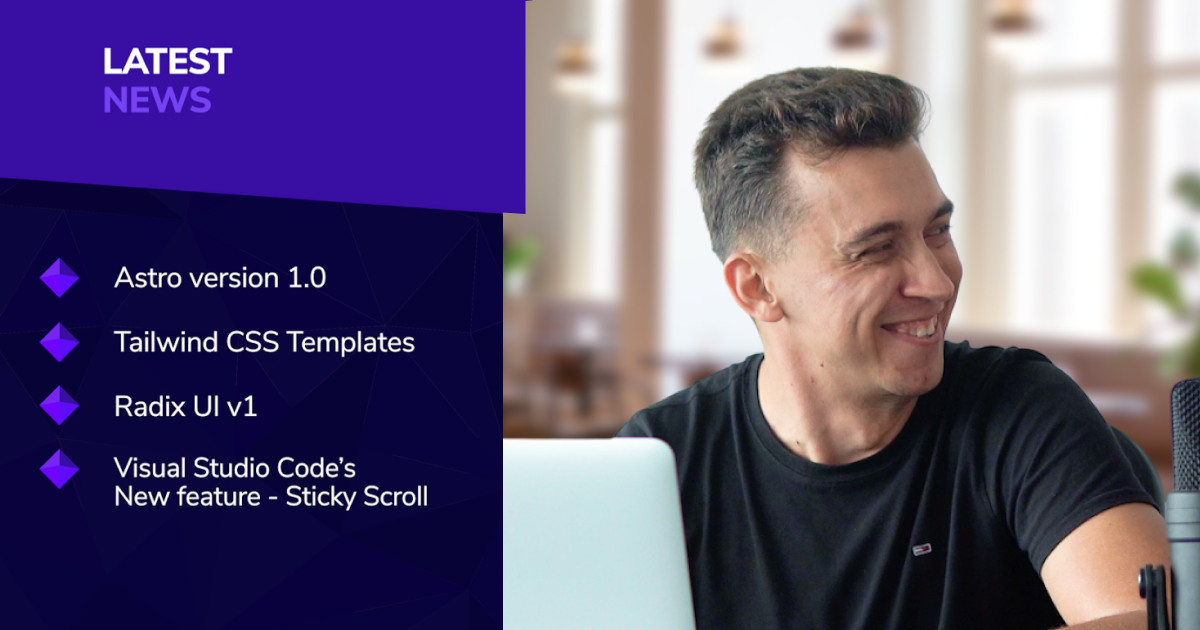 And now jumping to the next news which is - Tailwind CSS Templates. A few days ago tailwind team added a new feature, which is the Modern website templates, crafted with Tailwind CSS

What is it all about?

Each template is a well-structured Next.js project with a pleasant-to-use codebase for users.

Everything is styled with utility classes, just open the markup in your editor so Tailwind lets you change and fill whatever you want.

All of the code follows Tailwind CSS best practices because it’s written by the same dev team which used to create the Tailwind CSS network.

Radix UI is a React UI library with unstyled components. You can now write your styles very easily, without having to overload the default CSS.

What's cool about Radix UI is that all components are accessible. You can leave focus management, keyboard control or screen reader support (that is, things you never have time for) to this library.

What's worth mentioning about that?

We are talking about Sticky Scroll, the new feature with which you will never again get lost in the code, it makes life easier. Visual Studio Code introduced the Sticky Scroll tools in July. This feature shows UI with the scope the user is currently scrolling.

Become a part of the team that fits you, create really cool videos with us!

Interesting projects from all over the globe, opportunities to grow and nice people attached. Check out our openings.

Ask Us any question.

(preffered about front end, in other case we can answer longer and not on topic)

Free consultation usually takes 15 minutes, where we can answer any front end related questions. We are always trying to agree term which suits both sides. Our Experts take care about quality of all answers.

- How to solve problem of required technologies in the project?

- How to extend my team with experts of UX/UI?

Immediately after ordering a free consultation, our office will contact you, ask about the topic and arrange a convenient date for an interview with an expert.

Each interview is conducted by our internal consultant based on his full experience and knowledge. Even if he or she does not know the answer (which is rare), he will consult the topic with the full team and come back with the answer.

We will keep you up-to-date with fresh front end podcasts, news and articles

Still have some questions?

If you have any questions, feel free to contact us. Our Business Development Team will do their best to find the solution.